The Trip to “Scotland of India” (Coorg)
No Comments

At Ejyle, each one of us is a member of a happy team with open communication and mutual trust. That has been the key to Ejyle’s success. We also, at times, go out as a team to explore and experience some new places and engage in various team building activities. As part of this built-in culture at Ejyle, we recently went to “Scotland of India” (Coorg also known as Kodagu) to have fun together, learn some new things, experience nature, appreciate some of the outstanding work of Ejylites, and lot more.

The Start of Our Journey

We boarded a chartered bus at 6:45 AM on January 6, 2017 (Friday morning) and started our journey to Coorg.

We were all bit hungry by 8:30 AM and we stopped by a place called Hotel Shivasagar to have a traditional South Indian breakfast. Actually, Govind wanted to stop by Swati Delicacy instead but that was still 15 minutes away. For much of the team, 15 minutes were too many minutes!

Oh by the way, before breakfast, there was bit of dancing in the bus!

The best dancer was actually Rajendran who somehow escaped from my camera!

Little Jungle in Coorg is a beautiful and calm resort surrounded by lot of greenery and scenic beauty. In fact, Little Jungle is located in the middle of coffee plantation wherein they also grow cardamom, pepper, vanilla, and some fruits too. A very nice place indeed!

Well, that’s the place we were headed to and we reached by late afternoon on Friday.

After we reached, we had lunch, played some cricket and cards until evening. Not much to talk about cricket in particular because my side lost all the matches!

Later in the evening, Rasheed updated the team about the current progress, where things were, and some of the remarkable work Ejyle has been doing for its clients. He recognized and appreciated the contributions of many Ejylites and he gave away certificates to some of the best performers in the engineering team.

There was campfire late in the evening with full moon in the background. It was nice experience. Everyone looked forward to it especially because it can get quite cold there during nights.

On Saturday morning, we were led for a walk around the coffee estate. It was an interesting and educational experience since we saw and learnt about different kind of plantations which included different types of coffee beans and the history behind them, spices like pepper and cardamom, and some fruits like cherry. We also learnt that coffee plantation was actually started by an Indian who secretly “smuggled” some coffee beans on the way back from Mecca to India.

Napandapole Falls is located about 18 kms away from Little Jungle. It is situated in the foots of Kote Betta hill area and is surrounded by couple of sub water falls.

It took quite a bit of time to go down to the water fall as you actually have to either trek down the hill or walk down through the uneven concrete steps (700 of them!)

Some of our folks swam but few others stayed away because the water was quite cold though the weather was warm and sunny (thankfully).

The Rest of Saturday

After coming back, many of the team members were tired and chose to have a nap and some chose to play cards. Later in the evening, the team played games, music, and there was bit of dancing too.

Hurray! The team had nice time and it was time to say good bye to Little Jungle and Coorg on Sunday morning. 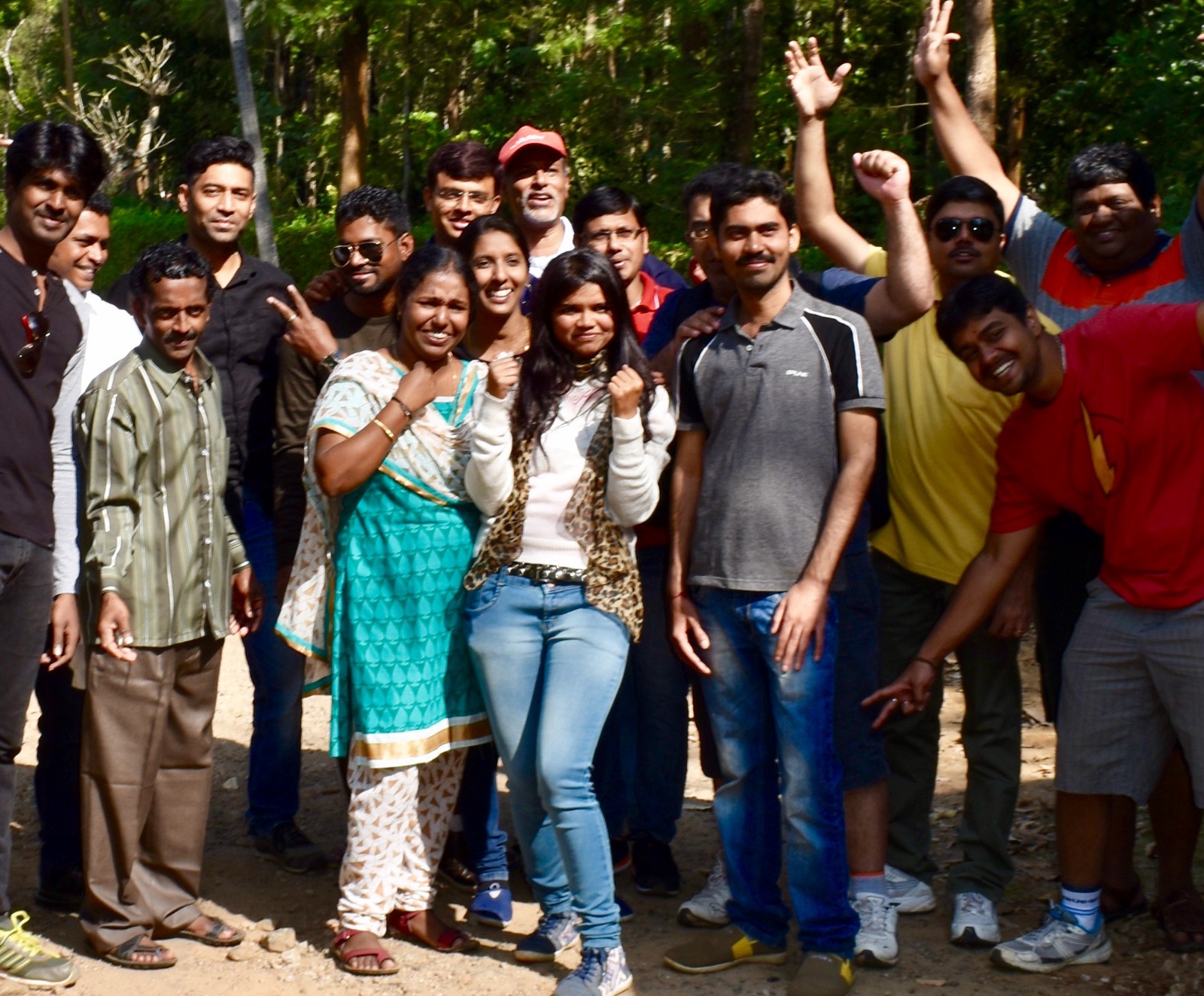